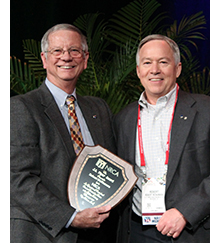 New Orleans— The National Roofing Contractors Association (NRCA) has announced Robert McNamara, president of F.J.A. Christiansen Roofing Co. Inc., a Tecta America company, is the 71st recipient of its annual J.A. Piper Award. The award was presented at the association's 131st Annual Convention held Feb. 6-8 in New Orleans. The J.A. Piper award is the industry's most prestigious honor, recognizing roofing professionals who have devoted constant outstanding service to NRCA and the roofing industry.

McNamara served as NRCA president in 2009-10 and most recently served as the chairman of the association's Long-term Investment Committee in 2016-17.

Prior serving as NRCA president, McNamara served as NRCA senior vice president from 2008-09; vice president from 2006-08; and director from 1996-99, 2002-06 and 2009-10. In addition, he has served on many committees, including serving as chairman of the Budget and Finance and Contractor Management Committees as well as president of the Awards Committee, Industry Advisory Board and National Roofing Legal Resource Center.

F.J.A. Christiansen Roofing also is a member of The Roofing Industry Alliance for Progress.

"The roofing industry has so many great people, great work ethics, and that's what our great country is all about," McNamara says. "I'm very proud to be a part of it."

First presented in 1948, the J.A. Piper Award is named for former NRCA President Joseph A. Piper, whose extraordinary efforts kept the association alive during the Great Depression.

NRCA is one of the construction industry's most respected trade associations and the voice of roofing professionals and leading authority in the roofing industry for information, education, technology and advocacy. It represents all segments of the roofing industry, including contractors; manufacturers; distributors; architects; consultants; engineers; building owners; and city, state and government agencies. NRCA's mission is to inform and assist the roofing industry, act as its principal advocate and help members in serving their customers. NRCA continually strives to enhance every aspect of the roofing industry. For information about NRCA and its services and offerings, visit www.nrca.net.